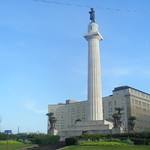 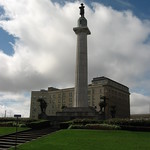 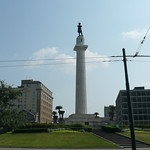 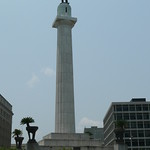 Lee Circle is a traffic circle with a monument to Confederate General, Robert E. Lee, in New Orleans, Louisiana. It is located on St. Charles Avenue, where it intersects Howard Avenue. Prior to the erection of the monument in 1884, the location was known as Tivoli Circle or Place du Tivoli. Tivoli Circle was an important, central point in the city, as it linked upriver areas with downriver areas. It was a common local meeting point and the site remains a popular place to gather for Mardi Gras parades. With the addition of the Robert E. Lee Monument, it was renamed Lee Circle.

The bronze statue which tops the Doric column was sculpted by Alexander Doyle. The statue was first unveiled to an audience of 15,000 people — including former Confederate President Jefferson Davis, two daughters of General Lee, and Confederate General Pierre G.T. Beauregard — on February 22, 1884 (George Washington's bithday).