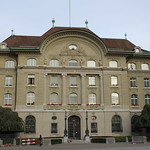 The Swiss National Bank (SNB) is the central bank of Switzerland, and so is therefore responsible for the monetary policy of the nation of Switzerland and also for the issuing of Swiss franc banknotes.

The SNB is an aktiengesellschaft under special regulations, and has two head offices, one is in Bern and the other one in Zurich.