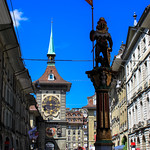 The Kramgasse ("Grocers Alley") is one of the principal streets in the Old City of Bern, the medieval city centre of Bern, Switzerland. It was the center of urban life in Bern until the 19th century. Today, it is a popular shopping street. Its length, slight curve and long line of Baroque façades combine to produce Bern's most impressive streetscape.

The Kramgasse and its buildings are a heritage site of national significance and part of the UNESCO Cultural World Heritage Site that encompasses the Old City.