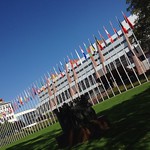 The Council of Europe (CoE; French: Conseil de l'Europe), founded in 1949, is a regional intergovernmental organisation whose stated goal is to promote human rights, democracy, and the rule of law in its 47 member states, covering 820 million citizens. The organisation is separate from the 28-nation European Union, though sometimes confused with it, in part because they share the European flag. Unlike the European Union, the Council of Europe cannot make binding laws.

Its two statutory bodies are the Committee of Ministers, comprising the foreign ministers of each member state, and the Parliamentary Assembly, composed of members of the national parliaments of each member state. The Commissioner for Human Rights is an independent institution within the Council of Europe, mandated to promote awareness of and respect for human rights in the member states. The Secretary General heads the secretariat of the organisation.

The headquarters of the Council of Europe are in Strasbourg, France. English and French are its two official languages. The Committee of Ministers, the Parliamentary Assembly and the Congress also use German, Italian, Russian, and Turkish for some of their work.