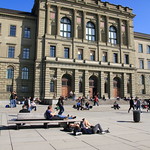 ETH
Things to see at ETH:
A bucket list of the top sights at ETH, ordered by popularity.

ETH Zurich (Swiss Federal Institute of Technology in Zurich, German: Eidgenössische Technische Hochschule Zürich) is an engineering, science, technology, mathematics and management university in the city of Zürich, Switzerland. Like its sister institution EPFL, it is an integral part of the Swiss Federal Institutes of Technology Domain (ETH Domain) that is directly subordinate to Switzerland's Federal Department of Economic Affairs, Education and Research.

The school was founded by the Swiss Federal Government in 1854 with the stated mission to educate engineers and scientists, serve as a national center of excellence in science and technology and provide a hub for interaction between the scientific community and industry.