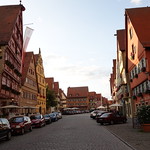 The town lies on the southern edge of the Franconian Heights and on the River Wörnitz, which rises in the town of Schillingsfürst. The population in 2013 was 11,315