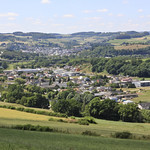 Diekirch (Luxembourgish: Dikrech; from Diet-Kirch, i.e. "people's church") is a commune with city status in north-eastern Luxembourg, capital city of the canton Diekirch and the district of Diekirch. The city is situated on the banks of the Sauer river.

The city's heraldic shield, showing a crowned lion on a castle, was granted in 1988. It is based on the city's 14th century seal and arms.

Diekirch was the first city in Luxembourg to have a pedestrian zone, in 1977.

Diekirch is home to a brewery of national importance carrying the city's name.

The city is home to the national operational headquarters of the Luxembourgish Army at the Haerebierg Military Centre (located on the hill Herrenberg) and the National Museum of Military History, reflecting Diekirch's pivotal role in the famous Battle of the Bulge, called by the Germans Rundstedt-Offensive, a major battle of World War II. It was here that the river Sauer was crossed on the night of January 18, 1945, by the US 5th Infantry division.

The city is also the seat of one of the six regional headquarters of the Grand Ducal Police and of one of the two judicial districts of Luxembourg.

As far as sports events are concerned, Diekirch has gained a reputation for its annual cross country running competition — the Eurocross — which is an IAAF permit meeting and attracts world-class runners, with Gabriela Szabo and Irina Mikitenko among its past winners.