Buran
Things to see at Buran:
A bucket list of the top sights at Buran, ordered by popularity. 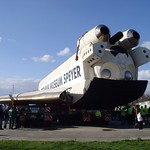 OK-1K1 completed one unmanned spaceflight in 1988 and was destroyed in 2002, when the hangar it was stored in collapsed. It remains the only Soviet reusable spacecraft to be launched into space. The Buran-class space shuttle orbiters used the expendable Energia rocket as launch vehicle.