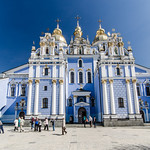 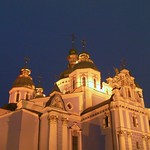 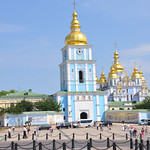 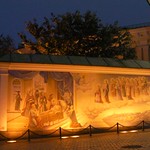 St. Michael's Golden-Domed Monastery (Ukrainian: Михайлівський золотоверхий монастир, Mykhaylivs’kyi zolotoverkhyi monastyr) is a functioning monastery in Kiev, the capital of Ukraine. The monastery is located on the right bank of the Dnieper River on the edge of a bluff northeast of the Saint Sophia Cathedral. The site is located in the historic administrative Uppertown and overlooks the city's historical commercial and merchant quarter, the Podil neighbourhood.

Originally built in the Middle Ages by Sviatopolk II Iziaslavych, the monastery comprises the Cathedral itself, the Refectory of St. John the Divine, built in 1713, the Economic Gates, constructed in 1760 and the monastery's bell tower, which was added c. 1716–1719. The exterior of the structure was rebuilt in the Ukrainian Baroque style in the 18th century while the interior remained in its original Byzantine style. The original cathedral was demolished by the Soviet authorities in the 1930s, but was reconstructed and opened in 1999 following Ukrainian independence in 1991.