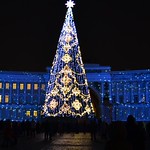 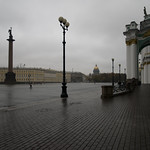 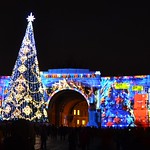 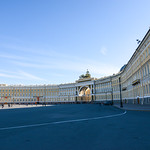 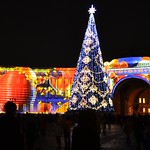 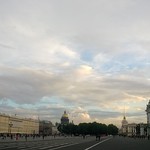 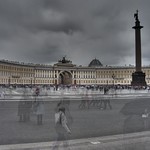 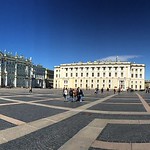 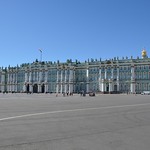 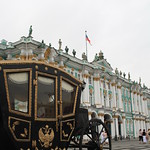 Palace Square (Russian: Дворцо́вая пло́щадь, tr. Dvortsovaya Ploshchad; IPA: [dvɐˈrtsovəjə ˈploɕːɪtʲ]), connecting Nevsky Prospekt with Palace Bridge leading to Vasilievsky Island, is the central city square of St Petersburg and of the former Russian Empire. It was the setting of many events of worldwide significance, including the Bloody Sunday (1905) and the October Revolution of 1917.

The earliest and most celebrated building on the square is the baroque white-and-azure Winter Palace of Russian tsars (1754–62), which gave the square its name. Although the adjacent buildings are designed in the Neoclassical style, they perfectly match the palace in their scale, rhythm, and monumentality. The opposite, southern side of the square was designed in the shape of an arc by George von Velten in the late 18th century. These plans were executed half a century later, when Alexander I of Russia envisaged the square as a vast monument to the Russian victory over Napoleon and commissioned Carlo Rossi to design the bow-shaped Empire-style Building of the General Staff (1819–29), which centers on a double triumphal arch crowned with a Roman quadriga.

The centre of the square is marked with the Alexander Column (1830–34), designed by Auguste de Montferrand. This red granite column (the tallest of its kind in the world) is 47.5 metres high and weighs some 500 tons. It is set so well that no attachment to the base is needed.

The eastern side of the square is occupied by Alessandro Brullo's building of the Guards Corps Headquarters (1837–43). The western side, however, opens towards Admiralty Square, thus making the Palace Square a vital part of the grand suite of St Petersburg squares.