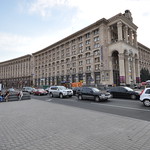 Khreshchatyk (Ukrainian: Хрещатик, Khreshchatyk;) is the main street of Kiev, Ukraine. The street has a length of 1.2 km. It stretches from the European Square (northeast) through the Maidan and to Bessarabska Square (southwest) where the Besarabsky Market is located. Along the street are located buildings of the Kiev City Administration which contains both the city's council and the state administration, the Main Post Office, the Ministry of Agrarian Policy, the State Committee of Television and Radio Broadcasting, the Central Department Store (TsUM), the Besarabka Market, the Ukrainian House, and others.

The entire street was completely destroyed during World War II by the retreating Red Army troops and rebuilt in the neo-classical style of post-war Stalinist architecture. Among prominent buildings that did not survive were the Kiev City Duma, the Kiev Stock Exchange, Hotel Natsional, the Ginzburg House. The street has been significantly renovated during the modern period of Ukraine's independence. Today, the street is still significant to administrative and business city organizations, as well as a popular tourist attraction.

As of 2010, Khreshchatyk is included in the Top 20 of most expensive shopping streets in Europe.