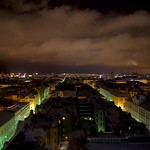 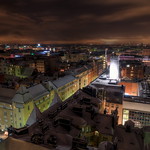 Hotel Torni (Hotel Tower) is a historical hotel located in Helsinki, Finland and part of the Sokos Hotels hotel chain. When opened in 1931, it became the tallest building in Finland, a position it maintained until the completion of the new Fortum (then Neste) headquarters in neighboring Espoo in 1976, and it remained the tallest building in Helsinki until 1987. The interior of the building was completely renovated in 2005. It is located in Helsinki's Design District.