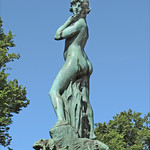 Havis Amanda is a nude female statue in Helsinki, Finland. It was sculpted by Ville Vallgren (1855-1940) in 1906 in Paris, but was not erected at its present location at the Market Square in Kaartinkaupunki until 1908.

Havis Amanda is one of Vallgren's Parisian Art Nouveau works. It is cast in bronze and the fountain it resides in is made of granite. She is a mermaid who stands on seaweed as she rises from the water, with four fish spouting water at her feet and surrounded by four sea lions. She is depicted leaning backwards as if to say goodbye to her element. Vallgren's intention was to symbolize the rebirth of Helsinki. The height of the statue is 194 centimetres and with the pedestal it stands 5 metres tall. According to Vallgren's letters the model for the statue was a then 19-year-old Parisian lady, Marcelle Delquini.

Vallgren himself simply called the work Merenneito (English: The Mermaid), but it quickly started to get additional nicknames. The Finland-Swedish newspapers dubbed it Havis Amanda and the Finnish Haaviston Manta or simply Manta. Havis Amanda is the common name used in brochures and travel guides.

It was unveiled on September 20, 1908. The work drew a lot of criticism at first, especially from women. Its nakedness and seductiveness were considered inappropriate. Not all groups objected to the nudity per se, but putting it on a pedestal was thought to subjugate women by making them appear weak and create sexual objectification and belittling of women (equal and common suffrage was introduced in Finland in 1906). Some women's rights groups criticised the look of the figure as plain and some even as "a common French whore", lacking pristine and innocence. The sea lions, with their human tongues hanging out, were said to represent men lusting after the mademoiselle. Vallgren considered himself a worshipper of women. Many in the cultural elite of Finland considered Vallgren an outsider and had judged his work even before it was finished. A good friend of his, Albert Edelfelt, was instrumental through his influence in getting the work ordered. Thanks to a small group of mainly Finland-Swedish supporters, the work gradually started gaining wide acceptance and natives started seeing it as the spirit of the city. Today it has been consistently voted the most important and most beautiful piece of art in Helsinki.

Every year on Vappu, Manta serves as a centrepiece for the celebrations. Students of the local universities put a cap on the statue in an elaborate ceremony. For many it is a "must see" event.

There is also an urban legend that Havis Amanda patronizes men's sexual potency. Some men believe that washing one's face with water from one of Havis Amanda's fountains and shouting thrice "Rakastaa!" (Finnish verb for loving someone) increases men's sexual ability.