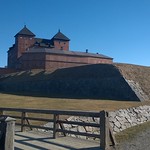 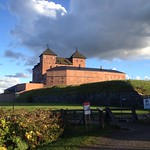 Hämeenlinna (Swedish: Tavastehus) is a city and municipality of about 68,000 inhabitants in the heart of the historical province of Häme in the south of Finland and is the birthplace of composer Jean Sibelius. Today, it belongs to the region of Tavastia Proper, and until 2010 it was the residence city for the Governor of the province of Southern Finland. Nearby cities include the capital Helsinki (98 km or 61 mi), Tampere (73 km or 45 mi) and Lahti (72 km or 45 mi).

The medieval Häme Castle (Hämeen linna) is located in the city.

The municipalities of Hauho, Kalvola, Lammi, Renko and Tuulos were consolidated with Hämeenlinna on 1 January 2009.