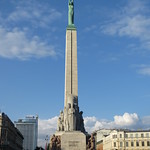 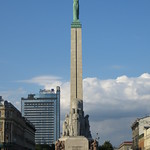 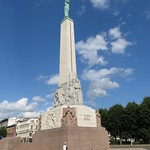 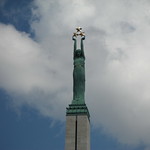 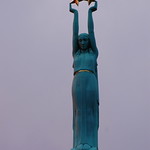 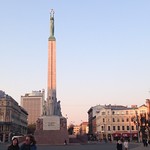 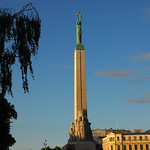 The Freedom Monument (Latvian: Brīvības piemineklis, pronounced [ˈbriːviːbas ˈpiɛmineklis]) is a memorial located in Riga, Latvia, honouring soldiers killed during the Latvian War of Independence (1918–1920). It is considered an important symbol of the freedom, independence, and sovereignty of Latvia. Unveiled in 1935, the 42-metre (138 ft) high monument of granite, travertine, and copper often serves as the focal point of public gatherings and official ceremonies in Riga.

The sculptures and bas-reliefs of the monument, arranged in thirteen groups, depict Latvian culture and history. The core of the monument is composed of tetragonal shapes on top of each other, decreasing in size towards the top, completed by a 19-metre (62 ft) high travertine column bearing the copper figure of Liberty lifting three gilded stars. The concept for the monument first emerged in the early 1920s when the Latvian Prime Minister, Zigfrīds Anna Meierovics, ordered rules to be drawn up for a contest for designs of a "memorial column". After several contests the monument was finally built at the beginning of the 1930s according to the scheme "Shine like a star!" submitted by Latvian sculptor Kārlis Zāle. Construction works were financed by private donations.

Following the Soviet occupation of Latvia in 1940 Latvia was annexed by the Soviet Union and the Freedom Monument was considered for demolition, but no such move was carried out. Soviet sculptor Vera Mukhina is sometimes credited for rescuing the monument, because she considered it to be of high artistic value. Soviet propaganda attempted to alter the symbolic meaning of the monument to better fit with Communist ideology, but it remained a symbol of national independence to the general public. Indeed, on June 14, 1987, about 5,000 people gathered at the monument to commemorate the victims of the Soviet regime and to lay flowers. This rally renewed the national independence movement, which culminated three years later in the re-establishment of Latvian sovereignty after the fall of the Soviet regime.