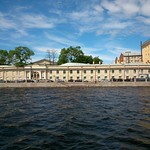 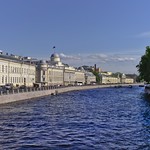 Fontanka (Russian: Фонтанка) is a left branch of the river Neva, which flows through the whole of Central Saint Petersburg, Russia. It is 6,700 metres (22,000 ft) long; its width is up to 70 metres (230 ft), and its depth is up to 3.5 metres (11 ft). The Fontanka Embankment is lined with the former private residences of Russian nobility.

This river, one of 93 rivers and channels in St. Petersburg, was once named Anonymous Creek (in Russian, Bezymyannyi Yerik, Безымянный ерик). In Russian, yerik is a secondary or intermittent river channel (creek or brook). In 1719, the river received its present name, because water from it supplied the fountains of the Summer Garden.

Until the mid-18th century, the Fontanka River was considered the southern boundary of St. Petersburg. Its banks were lined with the spacious messuages of Russian Imperial Family members and nobility, the most brilliant being the Summer Palace and Anichkov Palace. In 1780-1789 Andrey Kvasov superintended the construction of the granite embankments and approaches to the river. The river-bed was regularised as well.

Among the relics of Baroque architecture along the banks of the river are the Sheremetev Palace, Beloselsky-Belozersky Palace, Shuvalov Palace, and the Church of St. Panteleimon. The notable Neoclassical structures from the 18th century include the Catherine Institute, the Anichkov Palace and the Yusupov Palace. Some of the mansions contain museums of those writers and composers who lived there: Gavrila Derzhavin, Alexander Pushkin, Ivan Turgenev, Anna Akhmatova and others.

The Fontanka is spanned by fifteen bridges, including the 18th-century Lomonosov Bridge and the extravagant Egyptian Bridge. The most famous of these, the Anichkov Bridge, carries the Nevsky Prospekt over the river.