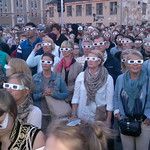 Flow (stylized as flOw) is an indie video game created by Jenova Chen and Nicholas Clark. Originally released as a free Flash game in 2006 to accompany Chen's master's thesis, it was reworked into a 2007 PlayStation 3 game by his development studio, thatgamecompany. SuperVillain Studios released a PlayStation Portable version of the game in 2008, and PlayStation 4 and PlayStation Vita versions in 2013. In Flow, the player navigates a series of two-dimensional (2D) planes with an aquatic microorganism that evolves by consuming other microorganisms. The game's design is based on Chen's research into dynamic difficulty adjustment at the University of Southern California's Interactive Media Division, and on psychologist Mihaly Csikszentmihalyi's theoretical concept of mental immersion or flow.

The Flash version of Flow received 100,000 downloads within its first two weeks of release, and had been played over 3.5 million times by 2008. Its PlayStation 3 re-release was the most downloaded game on the PlayStation Network in 2007, and won the Best Downloadable Game award at the 2008 Game Developers Choice Awards. It was nominated for awards by the Academy of Interactive Arts & Sciences and the British Academy of Film and Television Arts (BAFTA). Reviewers praised Flow's visual and audio appeal, but noted the simplicity of its gameplay; several considered it to be more of an art piece than a game.