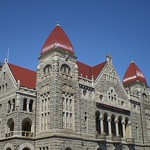 For the first thirty years of its existence, the theatre functioned primarily as a touring company. The theatre did not acquire a permanent home until 1902, when a purpose-built structure was erected in the heart of Helsinki, adjacent to the city's main railway station. The building hosting the Finnish National Theatre today was completed in 1902 and designed by architect Onni Tarjanne in the National Romantic style, inspired by romantic nationalism. The theatre still operates in these premises today, and over the years the building has expanded from its original size to encompass another three permanent stages. In addition to the Main Stage (Suuri näyttämö), the theatre comprises the Small Stage (Pieni näyttämö) built in 1954 (by architects Heikki Siren and Kaija Siren), the Willensauna Stage built in 1976, and the Omapohja studio built in 1987.

The theatre is often associated with the statue of the Finnish national romantic writer Aleksis Kivi, which is located in front of it.