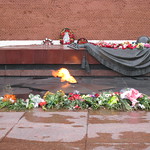 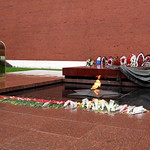 An eternal flame is a flame, lamp or torch that burns continuously for an indefinite period. Most eternal flames are ignited and tended intentionally, but some are natural phenomena caused by natural gas leaks, peat fires and coal seam fires, all of which can be initially ignited by lightning, piezoelectricity or human activity, and all of which can burn for decades or centuries.

In ancient times, human-tended eternal flames were fueled by wood or olive oil; modern examples usually use a piped supply of propane or natural gas. Eternal flames most often commemorate a person or event of national significance, or serve as a reminder of commitment to a common goal, such as international peace.