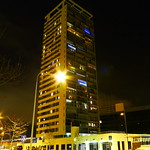 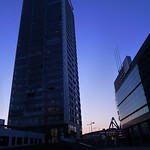 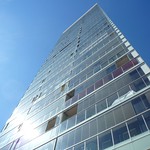 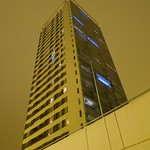 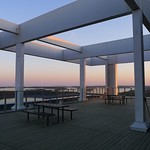 Cirrus (cloud classification symbol: Ci) is a genus of atmospheric cloud generally characterized by thin, wispy strands, giving the type its name from the Latin word cirrus meaning a ringlet or curling lock of hair. The strands of cloud sometimes appear in tufts of a distinctive form referred to by the common name of "mares' tails".

On planet Earth, cirrus generally appears white or light gray in color. It forms when water vapor undergoes deposition at altitudes above 5,000 m (16,500 ft) in temperate regions and above 6,100 m (20,000 ft) in tropical regions. It also forms from the outflow of tropical cyclones or the anvils of cumulonimbus cloud. Since cirrus clouds arrive in advance of the frontal system or tropical cyclone, it indicates that weather conditions may soon deteriorate. While it indicates the arrival of precipitation (rain), cirrus clouds only produce fall streaks (falling ice crystals that evaporate before landing on the ground).

Jet stream-powered cirrus can grow long enough to stretch across continents while remaining only a few kilometers deep. When visible light interacts with the ice crystals in cirrus cloud, it produces optical phenomena such as sun dogs and haloes. Cirrus is known to raise the temperature of the air beneath the main cloud layer by an average of 10 °C (18 °F). When the individual filaments become so extensive that they are virtually indistinguishable from one another, they form a sheet of high cloud called cirrostratus. Convection at high altitudes can produce another high-based genus called cirrocumulus, a pattern of small cloud tufts that contain droplets of supercooled water.

Cirrus clouds form on other planets, including Mars, Jupiter, Saturn, Uranus, and possibly Neptune. They have even been seen on Titan, one of Saturn's moons. Some of these extraterrestrial cirrus clouds are composed of ammonia or methane ice rather than water ice. The term cirrus is also used for certain interstellar clouds composed of sub-micrometer-sized dust grains.