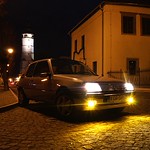 Biecz (Polish pronunciation: ['bʲɛt͡ʂ]) is a town and municipality in southeastern Poland, in Lesser Poland Voivodeship, Gorlice County. It is in the Carpathian Mountains, in the Doły Jasielsko Sanockie, by the Ropa River. Due to its rich history, it is often referred to as "little Kraków" or the "pearl of the Carpathians." The many preserved medieval city walls and buildings have also given rise to the nickname "Polish Carcassonne."

By the mid-16th century, the city was one of the largest in Poland. Being a royal city, Biecz enjoyed an economic and social Renaissance during the 14th and 15th centuries which tapered off into a gradual decline starting during the 17th century. Today, it is a small, picturesque tourist town with numerous historical monuments.