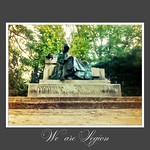 Anonymus is a Quebec thrash metal band founded in 1989. Their last studio album, "Chapter Chaos Begins", was released by Galy Records in 2006. They are known for their collaboration on the album L'Académie du Massacre featuring songs by Quebec satirical singer Mononc' Serge.

The band was nominated for a CMW Indie Award for Favorite Metal Artist/Group Or Duo of the Year in 2008.