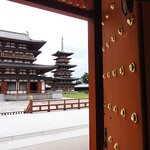 Yakushi-ji (薬師寺) is one of the most famous imperial and ancient Buddhist temples in Japan, that was once one of the Seven Great Temples of Nanto, located in Nara. The temple is the headquarters of the Hossō school of Japanese Buddhism. Yakushi-ji is one of the sites that are collectively inscribed as a UNESCO World Heritage Site, under the name of "Historic Monuments of Ancient Nara."

The main object of veneration, Yakushi Nyorai, also named "The Medicine Buddha", was one of first Buddhist Deities to arrive in Japan from China in 680, and gives the temple its name.