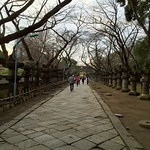 A Tōshō-gū (東照宮) is any Shinto shrine in which Tokugawa Ieyasu is enshrined with the name Tōshō Daigongen (東照大権現). Ieyasu was the founder of the Tokugawa shogunate (1603-1868), which is the third and last of the shogunal governments in Japanese history. It is part of Shrines and Temples of Nikkō UNESCO World Heritage site.

Tōshō-gū shrines are found throughout Japan. The most famous Tōshō-gū is located in Nikkō in Tochigi Prefecture. It is one of Japan's most popular destinations for tourists.

Ieyasu's son, the second shogun Hidetada, ordered the construction of the Nikkō Tōshō-gū. Later, the third shogun Iemitsu had the shrine greatly enlarged and lavishly decorated.

Ueno Tōshō-gū at Ueno Park in Tokyo is also widely known. The Kunōzan Tōshō-gū is in Shizuoka prefecture and rivals Nikkō's for decorative splendor. Another one is the Nagoya Tōshō-gū, constructed in 1619. A Tōshō-gū can also be found at Miyanochō, in Sendai.

During the Edo period, these shrines reached 500 in number. After the Meiji Restoration, many were abandoned, and others united with shrines in the area. Presently, there are about 130 Tōshō-gū.