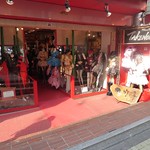 Takeshita Street (竹下通り, Takeshita-dōri) is a pedestrian-only street lined with fashion boutiques, cafes and restaurants in Harajuku in Tokyo, Japan. Stores on Takeshita Street include major chains such as The Body Shop, McDonald's and 7-Eleven, but most of the businesses are small independent shops that carry an array of styles. The shops on this street are often a bellwether for broader fads, and some are known as "antenna shops," which manufacturers seed with prototypes for test-marketing.

Takeshita Street was a reliable place to go and purchase fake Japanese and American street brand goods from the early 1990s to 2004. Since 2004, a stronger metropolitan government stance on counterfeit merchandise has led to a decrease of such items being available to the public.