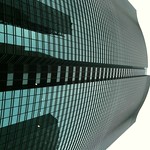 Shiodome
Things to see at Shiodome:
A bucket list of the top sights at Shiodome, ordered by popularity.

Shiodome (汐留) is an area in Minato, Tokyo, Japan, located adjacent to Shinbashi and Ginza, near Tokyo Bay and the Hamarikyu Gardens. Formerly a railway terminal, Shiodome has been transformed into one of Tokyo's most modern areas. It is a collection of 11 tiny town districts or cooperative zones, but generally there are three main areas:

Shiodome Station is a stop on the Yurikamome and Toei Ōedo Line; the complex is also within walking distance of Shimbashi Station.