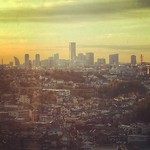 The museum is devoted to the Japanese ramen noodle soup and features a large recreation of Tokyo in the year 1958, the year instant noodles were invented. Within the museum are branches of famous ramen restaurants from Kyushu to Hokkaido. The list includes Ide Shoten, Shinasobaya, Keyaki, Ryushanhai, Hachiya, Fukuchan, and Komurasaki. In 2013, the museum added American restaurant Ikemen Hollywood to the museum's restaurants, and have since decided to close the branch in June 2014.

Along with restaurants, there is an old-style bar called 35 Knots, where visitors can smoke, and a few other places to buy traditional snacks and food. On the ground floor level, there is a souvenir shop selling ramen bowls, cooking utilities and customisable instant-ramen packages.