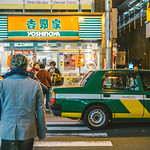 Shin-Ōkubo (新大久保) is a neighborhood within Tokyo's Shinjuku ward known for its extensive Korean community. It is built around Shin-Ōkubo Station and is accessible on the Yamanote Line. Shin-Ōkubo is home to both Korean residents in Japan as well as Korean immigrants, and has seen an upsurge in popularity due to Hallyu pop-culture. Unlike most of the Tokyo metropolitan area, where signs are bilingual Japanese and English, many signs in Shin-Ōkubo are trilingual: Korean, Japanese and English.