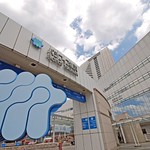 The meeting center and Yokohama Grand InterContinental Hotel were completed first on July 29, 1991 with an exhibition hall subsequently completed on October 12. On April 25, 1994, the national coliseum was completed.

The word "Pacifico" which stands for "Pacific" is derived from the Latin "pacificus" ("peace" in English), primarily meaning "peaceful" or "quiet".

In 2001 it was designated the main press centre for the 2002 FIFA World Cup and more exhibition halls were built.

Pacifico Yokohama is also used as a music venue.