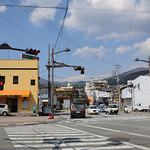 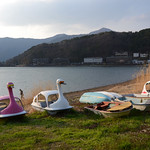 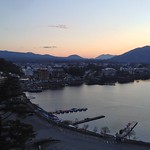 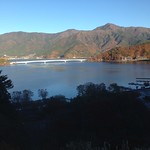 Lake Kawaguchi (河口湖, Kawaguchi-ko) is located in the border Fujikawaguchiko and Minobu, southern Yamanashi Prefecture near Mount Fuji, Japan. It is the second largest of the Fuji Five Lakes in terms of surface area, and is located at the lowest elevation. It is situated at an altitude of approximately 800 metres, which accounts for its relatively cool summers and frequently icy winters. It also has the longest shoreline of any of the Fuji Five Lakes.

The lake is within the borders of the Fuji-Hakone-Izu National Park.

The lake has no natural outlet, and flooding of settlements on its shores was a problem until the construction of a canal, completed in 1914, to connect it to a tributary of the Sagami River.

As with the other Fuji Five Lakes, the area is a popular resort, with many lakeside hotels, windsurfing facilities, camp sites, and excursion boats. Japanese crucian carp and wakasagi were introduced to the lake in the Meiji period, and sports fishing is also popular. Lake Kawaguchi is the most popular of the Fuji Five Lakes in terms of tourists, and has the most developed tourist infrastructure. The area also serves as a major hub for those wishing to climb Mount Fuji during the climbing season (July and August).

In 2013 the lake was added to the World Heritage List as part of the Fujisan Cultural Site.