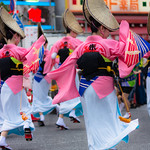 Koenji
Things to see at Koenji:
A bucket list of the top sights at Koenji, ordered by popularity.

Kōenji (高円寺) is an area of Tokyo in Suginami ward, west of Shinjuku. The neighborhood is named after some old temples in the area.

Kōenji is primarily a bedroom community with easy access to Shinjuku and Tokyo Stations. It was largely unaffected by the 1980s building boom and therefore many of the houses and shops in the area are small and reflect the character of pre-boom Japan. Due to its aging retail district and location on a major commuter route, the station area has become a center for small restaurants and "Live Houses" which offer live music. It is also known for having a young population and as a center for suburban underground culture including multiple used record and clothing shops. In 2006, when the Japanese PSE law went into effect restricting the sale of electronic goods built before 2001, Kōenji was chosen as the site for a protest due to its active "retro" culture and used equipment shops.