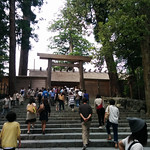 Ise Jingu
Things to see at Ise Jingu:
A bucket list of the top sights at Ise Jingu, ordered by popularity.

The Inner Shrine, Naikū (also officially known as "Kotai Jingū"), is located in the town of Uji-tachi, south of central Ise, and is dedicated to the worship of Amaterasu. The Outer Shrine, Gekū (also officially known as "Toyouke Daijingu"), is located about six kilometers from Naikū and dedicated to Toyouke-Ōmikami, the deity of agriculture and industry. Besides Naikū and Gekū, there are an additional 123 Shinto shrines in Ise City and the surrounding areas, 91 of them connected to Naikū and 32 to Gekū.

Purportedly the home of the Sacred Mirror, the shrine is one of Shinto's holiest and most important sites. Access to both sites is strictly limited, with the common public allowed to see little more than the thatched roofs of the central structures, hidden behind four tall wooden fences. The chief priest or priestess of Ise Shrine must come from the Imperial House of Japan and is responsible for watching over the Shrine.

The two main shrines of Ise are joined by a pilgrimage road that passes through the old entertainment district of Furuichi. The region around the shrines consists of the Ise-Shima National Park and numerous other holy and historic sites including the "wedded rocks" (Meoto Iwa), and the Saikū (the site of the Heian period imperial residence).