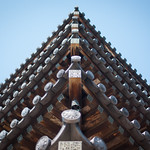 The temple's pagoda is widely acknowledged to be one of the oldest wooden buildings existing in the world, underscoring Hōryū-ji's place as one of the most celebrated temples in Japan. In 1993, Hōryū-ji was inscribed together with Hokki-ji as a UNESCO World Heritage Site under the name Buddhist Monuments in the Hōryū-ji Area. The Japanese government lists several of its structures, sculptures and artifacts as National Treasures. A study of its shinbashira, the central wooden column almost suspended inside the Tō in 2001 led to a conclusion about the structure being older than previously thought by a century.