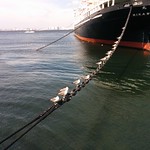 Hikawa Maru (氷川丸) is a Japanese ocean liner that Yokohama Dock Company built for Nippon Yūsen Kabushiki Kaisha ("NYK Line"). She was launched on 30 September 1929 and made her maiden voyage from Kobe to Seattle on 13 May 1930. She is permanently berthed as a museum ship at Yamashita Park, Naka-ku, Yokohama.

Hikawa Maru was one of three Hikawa Maru class motor ships, all named after major Shinto shrines. The Hikawa Shrine is in Saitama in central Honshu. Her two sister ships, both lost in the Second World War, were Heian Maru and Hie Maru.