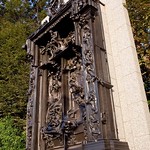 The Gates of Hell

The Gates of Hell (French: La Porte de l'Enfer) is a monumental sculptural group work by French artist Auguste Rodin that depicts a scene from "The Inferno", the first section of Dante Alighieri's Divine Comedy. It stands at 6 metres high, 4 metres wide and 1 metre deep (19.7×13.1×3.3 ft) and contains 180 figures. The figures range from 15 centimetres (6 in) high up to more than one metre (3 ft). Several of the figures were also cast independently by Rodin.