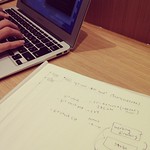 It is served by Hatagaya Station on the Keio New Line. It is also served by bus, linking Shinjuku, Nakano, Shibuya, Asagaya and Yoyogi.

Olympus and Terumo have offices there. The main shopping district in Hatagaya is Rokugo dori (六号通り) which is a main street along which there are many shops, restaurants and bars.