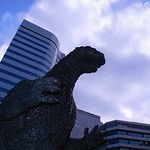 Godzilla (ゴジラ, Gojira) (/ɡɒdˈzɪlə/; [ɡoꜜdʑiɽa]) is a giant monster originating from a series of tokusatsu films of the same name from Japan. It first appeared in Ishirō Honda's 1954 film Godzilla. Since then, Godzilla has gone on to become a worldwide pop culture icon, appearing in numerous media including video games, novels, comic books, television shows, 28 films produced by Toho and two Hollywood films. The character is commonly alluded to by the title King of the Monsters, a phrase first used in Godzilla, King of the Monsters!, the Americanized version of Honda's original 1954 film.

With the nuclear bombings of Hiroshima and Nagasaki and the Lucky Dragon 5 incident still fresh in the Japanese consciousness, Godzilla was conceived as a metaphor for nuclear weapons. As the film series expanded, some stories took on less serious undertones portraying Godzilla as a hero while other plots still portrayed Godzilla as a destructive monster; sometimes the lesser of two threats who plays the defender by default but is still a danger to humanity.