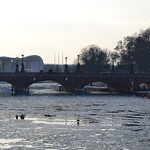 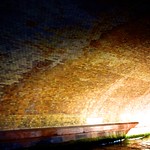 Moltke Bridge is a bridge over the Spree River in Berlin, Germany. Completed in 1891, it connects Alt-Moabit near the main railway station on the north bank to Willy-Brandt-Strasse and the Chancellery on the south bank. The bridge is named after Field Marshal Helmuth von Moltke the Elder (1800–1891), chief of staff of the Prussian Army for thirty years. Moltke died just before the bridge's completion and it was inaugurated by his funeral cortege. The bridge has three crossed arches spanning the Spree made from red Main sandstone, decorated with statues of Johannes Boesen, Carl Piper and Carl Begas.