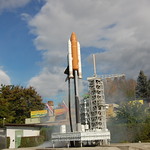 The Minimundus is a miniature park on the Wörthersee at Klagenfurt in Carinthia, Austria. It displays over 150 miniature models of architecture from around the world, built at a ratio of 1:25.

Since its opening in 1958, more than 15 million visitors have visited the 26,000 square meters park. The proceeds benefit the children's help organization Rettet das Kind ("Save the Child"), which owns the park.

A small selection of the models:

Most of the models are transportable and are moved to other areas during off-season winter.