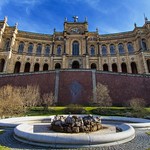 The Maximilianeum, a palatial building in Munich, was built as the home of a gifted students' foundation and has also housed the Bavarian Landtag (state parliament) since 1949.

The principal was King Maximilian II of Bavaria, who started the project in 1857. The leading architect was Friedrich Bürklein. The building is situated on the bank of river Isar before the Maximilian Bridge and marks the eastern end of the Maximilianstrasse, one of Munich's royal avenues which is framed by neo-Gothic palaces influenced by the English Perpendicular style. Due to statical problems the construction was only completed in 1874 and the facade of the Maximilianeum which was originally planned also in neo-Gothic style had to be altered in renaissance style under the influence of Gottfried Semper. The facade was decorated with arches, columns, mosaics and niches filled with busts. The building was extended on its back for new parliament offices, several modern wings were added in 1958, 1964, 1992 and again in 2012.