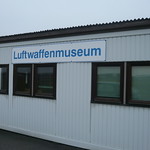 The museum is in Berlin at a former Luftwaffe and Royal Air Force (RAF) airfield, RAF Gatow. The focus is on military history, particularly the history of the Luftwaffe of the Bundeswehr. The museum has a collection of more than 200,000 items, including 155 aeroplanes, 5,000 uniforms and 30,000 books. There are also displays (including aeroplanes) on the history of the airfield when it was used by the RAF.

Aircraft include World War I planes such as the Fokker E.III as reproductions, and World War II planes such as the Bf 109, as well as at least one aircraft of every type ever to serve in the air forces of East and West Germany. Most of those postwar aircraft are stored outside on the tarmac and runways, however, and many are in bad condition. There are long term restoration projects, including a Focke-Wulf Fw 190.