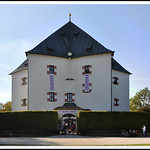 The surrounding game reserve was founded in 1530 King Ferdinand I. 25 years later, he commissioned his younger son Ferdinand II, Archduke of Austria to build the villa. The foundations were laid on 27 June 1555 by the Archduke alone, and construction of the villa was completed three years later. The villa is in the shape of a six-pointed star, from where it and the game reserve gained their shared name.

In 1962, the villa was listed as a national cultural monument, which it remains today. An exhibition on the Battle of White Mountain, which took place nearby, is now on display inside the villa which is open to the public.