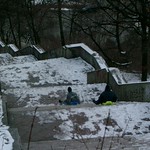 Letna
Things to see at Letna:
A bucket list of the top sights at Letna, ordered by popularity.

Letná is a hill overlooking Prague historic centre and Vltava River just besides Prague Castle. It neighbours Stromovka, the largest park in Prague. The hill belongs to Holešovice and Bubeneč quarters of Prague 7.

The main part of Letná is Letná Plain (Letenská pláň), a large empty plain and Letná Park (Letenské sady) popular for summer strolls and informal sports (inline skating and jogging being the most popular here).

Due to its position it used to be the venue for the largest Stalin statue in Europe. The statue was torn down in the 1960s.