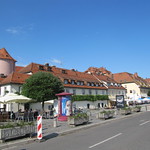 Lent (Latin: Quadragesima - English: Fortieth) is a solemn religious observance in the liturgical calendar of many Christian denominations that begins on Ash Wednesday and covers a period of approximately six weeks before Easter Sunday. The traditional purpose of Lent is the preparation of the believer through prayer, penance, repentance of sins, almsgiving, atonement and self-denial. This event, along with its pious customs, is observed by Christians in the Anglican, Calvinist, Lutheran, Methodist, Roman Catholic and Eastern Orthodox traditions. Today, some Anabaptist and evangelical churches also observe the Lenten season.

Its institutional purpose is heightened in the annual commemoration of Holy Week, marking the death, burial and resurrection of Jesus, which recalls the tradition and events of the New Testament beginning on Friday of Sorrows, further climaxing on Jesus' crucifixion on Good Friday, which ultimately culminates in the joyful celebration on Easter Sunday of the Resurrection of Jesus Christ. During Lent, many Christians commit to fasting or giving up certain types of luxuries as a form of penitence. Many Christians also add a Lenten spiritual discipline, such as reading a daily devotional, to draw themselves near to God. The Stations of the Cross, a devotional commemoration of Christ's carrying the Cross and of his execution, are often observed. Many Roman Catholic and some Protestant churches remove flowers from their altars, while crucifixes, religious statues, and other elaborate religious symbols are often veiled in violet fabrics in solemn observance of the event. Throughout Christendom, some adherents mark the season with the traditional abstention from the consumption of meat, most notably among Roman Catholics.

Lent is traditionally described as lasting for forty days, in commemoration of the forty days which, according to the Gospels of Matthew, Mark and Luke, Jesus spent, before beginning his public ministry, fasting in the desert, after which he endured temptation by the Devil. In most of the West, it begins on Ash Wednesday. Different Christian denominations calculate its length differently. On this see Duration, below.