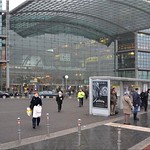 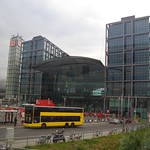 Berlin Hauptbahnhof ( listen) ("Berlin main station", sometimes translated as Berlin Central Station) is the main railway station in Berlin, Germany. It came into full operation two days after a ceremonial opening on 26 May 2006. It is located on the site of the historic Lehrter Bahnhof, and until it opened as a main line station, it was a stop on the Berlin S-Bahn suburban railway temporarily named Berlin Hauptbahnhof–Lehrter Bahnhof. The station is operated by DB Station&Service, a subsidiary of Deutsche Bahn AG, and is classified as a Category 1 station, one of 21 in Germany and four in Berlin, the others being Berlin Gesundbrunnen, Berlin Südkreuz and Berlin Ostbahnhof.

Lehrter Bahnhof (Lehrte Station) opened in 1871 as the terminus of the railway linking Berlin with Lehrte, near Hanover, which later became Germany's most important east-west main line. In 1882, with the completion of the Stadtbahn (City Railway, Berlin's four-track central elevated railway line, which carries both local and main line services), just north of the station, a smaller interchange station called Lehrter Stadtbahnhof was opened to provide connections with the new line. This station later became part of the Berlin S-Bahn. In 1884, after the closure of nearby Hamburger Bahnhof (Hamburg Station), Lehrter Bahnhof became the terminus for trains to and from Hamburg.

Following heavy damage during World War II, limited services to the main station were resumed, but then suspended in 1951. In 1957, with the railways to West Berlin under the control of East Germany, Lehrter Bahnhof was demolished, but Lehrter Stadtbahnhof continued as a stop on the S-Bahn. In 1987, it was extensively renovated to commemorate Berlin's 750th anniversary. After German reunification it was decided to improve Berlin's railway network by constructing a new north-south main line, to supplement the east-west Stadtbahn. Lehrter Stadtbahnhof was considered to be the logical location for a new central station.