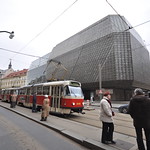 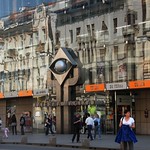 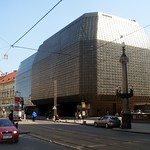 Laterna Magika is a multimedia theatre located in Prague. Its origins are connected with the Expo '58 in Brussels. The plays are internationally comprehensible since they are silent or with limited speech and subtitles. The performances are a combination of dance, film and black theatre. Laterna Magika is a well known tourist destination and is considered key in the development of modern Czech theatre.

The director Alfréd Radok and scenographer Josef Svoboda, introduced their peculiar theatrical form in Brussels and titled it Laterna Magika (Magic Lantern). The essence of the project lies in the connection of film and theatre, in a kind of "new media show". Radok and Svoboda used polyekran (parallel projection to more screens), synchronized individual theatrical and film elements, and organized their inner rhythm into one "multi-genre" performance.

After the exhibition ended, the programme was transferred to Prague, to establish a new experimental scene. Laterna Magika was at first (in 1958-60) joined to Prague's National Theatre, however, its activity was later connected to other Prague theatres.

Outside of theatre, Laterna Magika is best known as Civic Forum's headquarters during the Velvet Revolution of 1989.