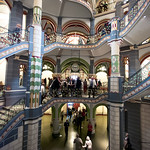 The judiciary of Germany is the system of courts that interprets and applies the law in Germany.

The German legal system is a civil law based on a comprehensive compendium of statutes, as compared to the common law systems. Germany uses an inquisitorial system where the judges are actively involved in investigating the facts of the case, as compared to an adversarial system where the role of the judge is primarily that of an impartial referee between the prosecutor and the defendant.

The independence of the judiciary of Germany is historically older than democracy in Germany. The organisation of courts is traditionally strong, and almost all federal and state actions are subject to judicial review.

Judges follow a distinct career path. At the end of their legal education at university, all law students must pass a state examination before they can continue on to an apprenticeship that provides them with broad training in the legal profession over two years. They then must pass a second state examination that qualifies them to practice law. At that point, the individual can choose either to be a lawyer or to enter the judiciary. Judicial candidates start working at courts immediately. However, they are subjected to a probationary period of up to five years before being appointed as judges for life.

The judicial system is established and governed by part IX of the Grundgesetz für die Bundesrepublik Deutschland (the Basic Law of the Federal Republic of Germany). Article 92 of the Basic Law establishes the courts, and that states that "the judicial power shall be vested in the judges; it shall be exercised by the Federal Constitutional Court, by the federal courts provided for in this Basic Law, and by the courts of the Länder."