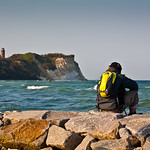 Cape Arkona (German: Kap Arkona) is a 45-metre-high cape on the island of Rügen in Mecklenburg-Vorpommern, Germany. It forms the tip of the Wittow peninsula, just a few kilometres north of the Jasmund National Park. The protected landscape of Cape Arkona, together with the fishing village of Vitt, belongs to the municipality of Putgarten and is one of the most popular tourist destinations on Rügen, receiving about 800,000 visitors annually.

On the cape there are two lighthouses, a navigation tower, two military bunker complexes, the Slavic temple fortress of Jaromarsburg and several tourist buildings (restaurants, pubs and souvenir shops).

Because of its geology and the weathering that occurs here, there are frequent coastal collapses, especially in winter.

Cape Arkona is often referred to as "the northernmost point of Rügen", which is not true. Approximately one kilometre to the north-west, there is a point on the steep coast, known as the Gellort, which is a little further north. Directly at the foot of the Gellort is a 165-ton glacial erratic boulder known as the Siebenschneiderstein (Low German: Söbenschniedersteen). The cape offers an impressive view of the island, both from land or sea.