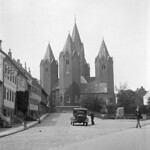 Kalundborg is a Danish city with a population of 16,343 (1 January 2015), the main town of the municipality of the same name and the site of its municipal council. It is situated on the northwestern coast of the largest Danish island, Zealand, on the opposite, eastern side of which lies Copenhagen, 110 km (68 mi) away.

Kalundborg is famous as the location of a large broadcasting facility, the Kalundborg transmitter. The city is also home to the largest coal-fired power station in Denmark.

Kalundborg is a mainly trading and industrial town, but is also well known for the beautiful five-spired Church of Our Lady, which is closely associated with King Valdemar I and the famous Archbishop Absalon. The church itself is said to have been built by Absalon's brother, Esbern Snare.

Kalundborg is also the traditional seat of the aristocratic Lerche family. Their stately home, Lerchenborg, the best example of rococo architecture in Denmark, can be seen in the town's outskirts.

Kalundborg is the birthplace of the Norwegian Nobel laureate author Sigrid Undset, who lived there during the first two years of her life, before her parents emigrated to Norway in 1884.

Ferries connect Kalundborg westward to Århus, on the Jutland peninsula, and to the island of Samsø.