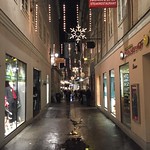 Jewish quarters in Europe existed for a number of reasons. In some cases, Christian authorities wished to segregate Jews from the Christian population so that Christians would not be "contaminated" by them or so as to put psychological pressure on Jews to convert to Christianity. From the Jewish point of view, concentration of Jews within a limited area offered a level of protection from outside influences or mob violence. In many cases, residents had their own justice system. When political authorities designated an area where Jews were required by law to live, such areas were commonly referred to as ghettos, and were usually coupled with many other disabilities and indignities. The areas chosen usually consisted of the most undesirable areas of a city. In the 19th century, Jewish ghettos were progressively abolished, and their walls taken down, though some areas of Jewish concentration continued and continue to exist. In some cities, Jewish quarters refer to areas which historically had concentrations of Jews. For example, many maps of Spanish towns mark a "Jewish Quarter", though Spain hasn't had a significant Jewish population for over 500 years.

However, in the course of World War II, Nazi Germany reestablished Jewish ghettos in Nazi-occupied Europe (which they called Jewish quarters) for the purpose of segregation, persecution, terror, and exploitation of Jews, mostly in Eastern Europe. According to USHMM archives, "The Germans established at least 1,000 ghettos in German-occupied and annexed Poland and the Soviet Union alone."